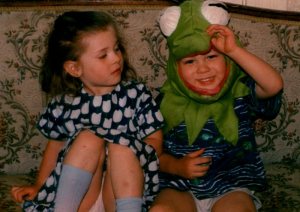 Will at about the age of his disappearance, wearing a Kermit the Frog head. His twin Alice looks on, askance.

When my son Will was a toddler, he was kidnapped.  Or he ran away. In any case, one sunny summer afternoon my ex and I glanced up from our work in the garden to find Will  nowhere in sight.  We panicked.  While I stayed back in the yard with the girls, breathing via a paper bag, my ex careened around the neighbourhood, flailing his arms and shrieking, our collie, confused but psyched,  in hot pursuit. Neighbours joined in, some on bicycles to broaden the search area.  I called the police.

Then, about a half an hour in, Paulie, the dozy pre-K grandson of our next door neighbour, jerked to sudden life and decided to share. “I saw where Will went,” he said.

Now Paulie was a pathetic child – strangely boneless with a thin face and lank hair. Rheumy eyed and snot encrusted, he looked like he subsisted entirely on a diet of Cheetos.  But it wasn’t just Paulie’s desperate appearance that rendered him piteous.  It was everyone’s palpably low regard for him.  My children, being children and therefore  without mercy, thought him very weak tea indeed, but so did his family.  “Oh, Paulie!” they would cry with thinly veiled contempt.  Paulie couldn’t do anything right and he knew it.

But not that day.

“Really, Paulie?  You saw where Will went?”  His mother dropped to her knees before her wretched child, seizing him by the shoulders.  A thought bubble appeared over her head:  “Is it possible that my limp rag of a loser son might actually be the one to save this day?”

“Come on, Paulie!” his grandmother  chimed in. “Tell us!  Tell us where he went!”

As if around a blazing fire on a cold night, all the grownups in the vicinity instantly gathered round.  Suddenly Paulie was the center not merely of attention, but rapt attention.  He reacted to this the way  fainting goats react to panic – he froze, agog.   I removed the paper bag from over my mouth and sobbed convulsively.  “Paulie, please!”

Emerging from his brief myotonic episode, Paulie shuddered convulsively.  Then he turned thoughtful.  “Well,” he began.  He paused and began again.  “Well, he came down those steps.”   He pointed to the front steps of our house.

“He came down the walk . . . .” Paulie indicated the walk the front stoop to the sidewalk.

Paulie furrowed his brow and screwed up his mouth.  He cocked his head to one side and glanced down at his battered flip flops. His eyes widened as if he was seeing his toes for the first time.

“What did he do then, Paulie?” his mother implored him. “Do you remember what Will did then?  It’s very important!”

The grownups joined in a rousing chorus of encouragement.

“We believe in you, Paulie!”

Paulie sucked in air, exhaled and surveyed the adults crowded around him.  Like Obama after his second Inauguration, he was pretty certain he wasn’t going to see this again and he wanted to take it all in.  Finally, he spoke.  “Then Will split in two and half of him went this way and the other half went that way!”

“Oh, Paulie!” everyone cried, turning away in disgust.

That was when the police showed up, followed shortly thereafter by Will. He appeared in the front door, theatrically rubbing his eyes and claiming to have been asleep under a desk in his father’s office the entire time.  Years later he confessed that he had, instead, watched through an upstairs window as the drama unfolded. Which we, being not entirely stupid, always sort of suspected.

As for Paulie, he had been, however briefly, the center of attention, a shining light, a hero in the making, a human being worthy of regard and a source of pride to his family.  In a life which, I suspect, would afford Paulie few such opportunities, he saw his chance, boldly seized it and then played it for all it was worth.