A sense of foreboding

The day I helped move my then 78 year old mother and 82 year old father into The Cedars of Chapel Hill (or, as my father calls it, ‘The Last Resort’), Mother advanced grimly into the elevator brandishing a large kitchen knife  capable of wreaking considerable mayhem on vegetables and meat alike.  It was, as she was careful to point out, extremely sharp. I’m not sure why she felt she had to personally convey it to her new home.  Maybe she didn’t trust the moving company to pack it correctly.  Maybe she wanted an assurance she’d be able to make a break for it.

The facility was new and all around us milled future neighbours, also moving in, although not, it would appear, so heavily armed as my mother.  These were not the young old you see in ads for golf resorts or Grey Power. These were the old old, the target market for walk-in tubs, stair lifts and catheters – people wasting away, all right, but definitely not in Margaritaville. Not anymore.   We were joined on the elevator by an elderly man with a black eye.  We eyed the eye.  He eyed the knife. No one spoke.  “What happened to him?” my mother asked, when we were safely off the elevator.   Then she shook her head. “They’re all so old!”

I did not personally feel old until we moved into this house three years ago.  In part that was because my husband and I stayed in our “starter home” for almost twenty years.   In that house’s mirrors I looked more or less the age I had been when we moved in; this house’s mirrors told a different tale.   “Hello!” they said.  “You’re sixty years old!  What’d you mean, you hadn’t noticed?”

This realization was corroborated by the fact that people I knew started to die. People my age.   It began with a passing acquaintance from junior high. He started to leak Tea Party sentiments onto Facebook. Deciding he was off The Team, I swooped in to defriend him, only to encounter the following posting:

“Hello, Dad’s Facebook Friends, this is Jennifer, Danny’s daughter.  Dad died suddenly last night and I don’t know how I’m going to make it through the next few days.  He was my best friend and I already miss him SOOOOOO MUCH!!!”

If I were a religious person, I might have felt guilty, as though I were in some obscure way responsible for Danny’s demise.  Or perhaps  I would have felt all powerful, as if all I needed to do was think about defriending somebody, and poof!   Or maybe I would have felt vindicated, as in, “God clearly agrees with me that Danny was a horse’s ass and so He offed him!”

But I am not religious, so the whole incident just creeped me out.    I did end up defriending Danny.  It’s the only way to exorcise ghosts on Facebook.   However, his death turned out not to be an isolated case. He was followed in short order by another, dearer friend and then another.  Then a friend our junior by more than a decade had the temerity to die!  Thanks a lot, guy! (You know who you are.)

Both my husband and I began to feel what we describe as “a sense of foreboding.”  We wake in the morning and lie there for a few minutes, deep in dogs and feeling the foreboding settle on us life a suffocating blanket, a miasmal fog.  Am I going to die today?  I wonder.  Is he going to die? Will it be a heart attack?  Maybe an aneurism?  Will my upcoming physical result in a fatal diagnosis?  What about a car crash that leaves one of us paralyzed?  When will we be forced to leave this house that we love? How many years do we have left?  Is it years or is it months?

After my parents moved into the Cedars, the man on the elevator became my parents’ good friend.  Sam owned Kentucky racehorses and was married to a lively Holocaust survivor.  One day I was sitting on my parents’ balcony, looking out over the gardens when I saw Sam collapse in the roadway.  I jumped up in alarm and called out to my mother, “Sam’s fallen!”  White uniformed staff materialized as if by magic from behind the bushes and collected Sam, helping him to his feet and brushing him off.  Unfazed, my mother glanced down at the unfolding scene.   “He falls a lot,” she said.

Which explains the black eye. 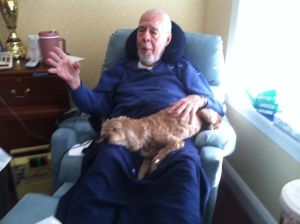 Dad and his dog Poppet

Sam is gone now and so is Mom.  Then there’s my Dad,  ninety two this March, waiting out his days in Death’s antechamber like an old dog in the sun, biding the time that remains to him with remarkable equanimity and grace.  I sometimes try and imagine what his sense of foreboding must be, how it must feel to be him, to wake up every morning to find oneself, against all odds, alive.  I bet it trumps ours.