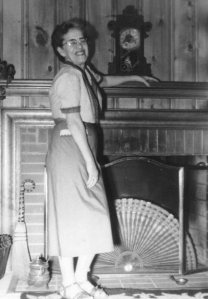 When my father was a child, my grandfather – Pops — served as foreman for a construction crew that traveled all over North Carolina, Virginia and Maryland building Texaco gas stations. My grandmother and their two boys – Dad and Clyde Junior — traveled with him, living in rooming houses along the way; it was my grandmother’s job to cook for the crew. “What was Noni like?” I once asked my father. “You know. Before?”

Dad shook his head sadly. “She was very capable . . . and warm-hearted, hospitable.” He added, “I wish you could have known her then, when she wasn’t this way.” By “this way” he meant, “senile.”

Noni was not all that old when she stepped out for lunch and never came back – in her early sixties, about the age I am now. The reason for her early-onset dementia was fairly straightforward. When she was in her forties, she underwent an operation for phlebitis. The doctor prescribed morphine for the pain and, “Do no harm” notwithstanding,  kept on prescribing it. Noni became a  morphine addict, which, as it turns out,  does not promote brain health. In not very much time at all Noni effectively pickled herself.

Throughout my childhood and several times a day, Pops would announce that it was time for Noni’s medicine and off the two of them would repair to his study where he would, essentially, shoot her up. It was treated very nonchalantly, by which I mean doors were not shut. At the time I thought it was creepy – it involved a hypodermic needle, after all, stuck in parts of your grandmother’s body that grandchildren do not wish to contemplate, much less view – but I did not at the time realize that Noni’s “medicine” was, in fact, morphine, nor did I realize how common morphine addiction was among white  women of her generation until I was researching the topic for Paper Son, one of the short stories in The Uncharted Heart – it was, in fact, a virtual epidemic, albeit a hidden one. I suddenly saw Eugene O’Neill’s Long Day’s Journey Into Night in a whole new light; as it turns out, it’s the story of my father’s family set in mid-twentieth century working class North Carolina.

I  only remember one instance during my teenage years in which Noni appeared cogent – probably because it was such a rare event. Pops had just concluded a tall tale and Noni piped up,  “Anybody believes that, stand on your head and I don’t see no feet!” Silence.  Everyone turned to look at her.  “What?” she said and went back to being not there.

Most of the time Noni sat on a urine-infused sofa in the living room looking blank. Every fifteen minutes or so, she would lurch to her feet, exit the living room, turn right down the hall, traverse my grandfather’s study, enter the kitchen, duck into the pantry where she would take a slug of bourbon from the bottle stashed there, return to the living room via the dining room and resume her seat on the redolent sofa, where she would twitch a couple of times before sinking once again into catatonia. That was how Noni rolled. She would only come back to life when it was time for us to leave. Then she would rouse herself and, no matter what time of day or night it might be, say, “Are you sure you won’t stay for lunch? There’s plenty of bologna.”

This woman provided one quarter of my DNA. (Or something like that.  I’ve never properly understood DNA.) 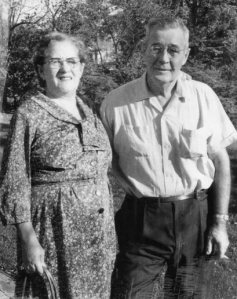 Pops and Noni.  By this time Noni’s pretty cooked.

My grandparents both lived well into their nineties. They spent the last five or so years of their life in different wings of a nursing home. Pops was frail but, like my own father, mentally sharp. He resided in the unlocked ward and had a great old time, acquiring a girlfriend named Bunny and editing the home’s newsletter.

Noni was placed in the block of rooms set aside for people with dementia. My brother Peter and I visited her there in the mid-eighties. A sign on the door to her room read, “Mrs. Hardy is undergoing Reality Therapy. Please ask her what day of the week it is, what year it is and who is President.”

Noni shook her head. “Why does everybody ask me that?” Then, “Harry S. Truman.”

As we were waiting for an elevator down to the main lobby of the nursing home, I said, “What do you think about this Reality Therapy business?  Do you think it’s doing Noni any good?”

The elevator arrived. We entered it. The door ground slowly closed the way elevator doors do in old folks homes. Peter looked solemn. “Don’t see no feet,” he said.

Past Due is a story about a senile old woman, her housemaid and a whole lot of chickens coming home to roost.  I did not base Miss Bob on Noni, but Noni does inform certain aspects of her character. It appeared in the Dalhousie Review in 1992. To read it, click on the title.

One thought on “Reality Therapy”