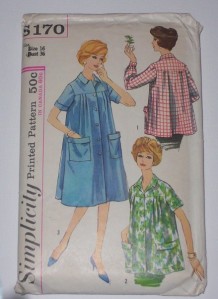 I am a bag lady.  It began with housecoats. When I was growing up, women wore housecoats, also known as ‘dusters.’ These were not bathrobes and definitely not lingerie. There was nothing sexy about a housecoat. Meant to be worn during the day, they were, by and and large, knee length, yoked, buttoned up the front and short sleeved; nobody looked good in a house coat and that was precisely the point. June Cleaver may have vacuumed in a shirtwaist and pearls, but the majority of middle-class American women accomplished this and other light housekeeping in a housecoat, accessorized by jumbo foam rollers and a pair of downtrodden terry cloth mules.  House coats were a uniform, like the stiffly starched, pastel dacron and cotton uniforms cleaning ladies used to wear when I was coming of age in North Carolina, only more forgiving. Housecoats had no waist, for starters, and they were never expected to be crisp.

My mother might have been a university professor, but the moment she got home, off came the nylons and that day’s equivalent of a power suit and on went the housecoat. Likewise Mini Me. I had housecoats from as far back I can remember, often miniature versions of Mom’s. Neither of us were doing much in the way of cleaning, but we were definitely women and we were definitely hanging out. Which is really what house coats were about – hanging out. Popping quaaludes, drinking in the afternoon, eating bonbons, or in the case of my mother, a diet candy called Ayds. Hanging out. Without waists.

Most women ordered their housecoats from Sears. Not us. Not when Mom was a fabulous seamstress and we could buy remnants of fabric at Haw River for as low as fifty cents a yard.  My favorite housecoat of all time – and the last one I remember owning — was one Mom made me when I was thirteen. It was black cotton with a full-on barnyard motif border print — pink and green chickens cavorting behind orange chicken wire.  I used to pose in it before the three quarter length mirror in my bedroom, appreciating how tragic I looked and how romantic.  Had I been born into the modern era I suppose I would have posted endless, stricken looking selfies on Facebook, causing my elderly female relatives to cluck their tongues and say, “If she’d only smile!” – just as I do today in the case of certain young female relatives who shall remain nameless, I’m just saying. Of course the gig was up the minute I stood before a full-length mirror, the pink and green chickens frolicking around the hem of my housecoat throwing cold water on any illusions I might harbor as to my own mystique.

After my chicken housecoat, I had bags. I define ‘bags’ as dresses of last resort which, in addition to not having a waist, do not require a bra. I have always had a closet full of clothes, but bags . . . bags are special.  For every twenty outfits there is but one true bag and that bag can be worn every day for a period of years until it becomes so threadbare or stained or I accidentally leave it on the hook of the bathroom of the Park, Sleep and Fly hotel that it is lost for ever and must be replaced by another bag. A bag is pure, unadulterated comfort. It’s what you put on at the end of a long, long day when you – simply put — don’t give a damn. Your bag is you.

There have been notable bags over the years and I treasure the memory of each and every one of them:

Each and every night my husband and I bag up. We take off the clothes that we have worn during the day – our work clothes, our gardening clothes, our yoga clothes – and put on our real clothes — our bags. So we can fully be ourselves. So that we can hang.

2 thoughts on “Hanging in bags”