Nice on the outside 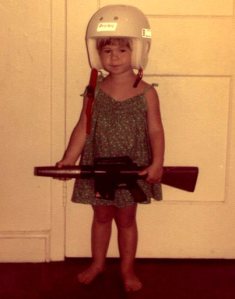 Brina at the age she was tormented by ‘Amos’. Does the gun foreshadow a later revenge fantasy of her mother’s?  I have no recollection what the helmet was for.

I was lying there in corpse pose on the floor of my yoga studio today, waiting for the class to begin and entertaining myself by telling someone off in my head when I realized: I do this.  A lot. For an ostensibly nice person who appears to get along with practically everybody, I seem to have quite a few bones to pick and I spend a fair amount of my quiet time doing just that.

That and revenge fantasies.

When my daughter Sabrina was little, she was in a play group with an appalling little boy whom I will call Amos. Amos’s parents were lovely and I’m sure Amos turned out to be a fine young man, but at three he was a monster. Sabrina worshiped him; he tormented her. It didn’t help that he looked like one of those troll dolls.   Many a night I put myself to sleep imagining burying Amos up to his neck in sand, pouring high fructose corn syrup over his stupid little head and liberating the prisoners of an ant farm in his immediate vicinity. I never touched a single solitary hair on Amos’s head, but I thought about it and hard.  Forget the woman scorned; her mother is the one to watch out for.

Whenever there’s another mass shooting in the U.S., I devote an amount of time to wishing that some nut bag would take a wrong turn and end up in an NRA convention. Loaded for bear and ready to rock, this white male with a very small penis would wade onto the convention floor, Rambo-style and guns a-blazing. If Wayne Lapierre had anything to do with it, those under attack would then draw their weapons and a bloodbath worthy of Quentin Tarantino would ensue. With any luck, everyone in the joint would be killed and we could start over again, like Noah after the Great Flood, the Earth washed clean of the stain of gun violence. For a long time I have kept this fantasy to myself. It seemed dangerous, as if writing down might make it happen. Every time one of these senseless massacres occurs, however, I get a teensy bit less concerned about the safety and well-being of the gun lobby and the craven politicians who, against all reason, allow the slaughter to continue.

And of course there’s the revenge fantasy you consign to pen and paper — one of the delicious perks of being a writer is that you can create a character based on someone what done you wrong, stick pins in him as though he were a Voodoo doll and watch him writhe.  To read one of my most virulent revenge fantasies and the first of my Cherokee stories, click on  Magical Thinking,  a story which originally appeared in The New Quarterly, 11,1, 1991.

My need to tell people off inside my head arises from the fact that, outside my head, I rarely do. Somebody will say, “Did you try and jew ’em down?” or, jocularly, “Does the fact that I got a pearl paint finish on my new car make me a fag?” or, “Those lazy son of a bitches on welfare are living high off the hog on my tax dollars,” statements which make me, inwardly, apoplectic. Most of the time, I squeak out something that could be interpreted either as a muffled protest or a throat being cleared, but only once have I come down hard.

It was on a plane from Vancouver to Kelowna, B.C.  A woman next to me struck up a conversation. She was a miserable creature. Her jerk husband had left her years before; she worked in retail and was barely scraping by; she had been out east to visit her sister, the weather had been terrible and it had all been so expensive; to make matters worse, her seventeen year old daughter was pregnant with a second, illegitimate baby and her son, “unfortunately”, was a heroin addict.

“What about you?” she asked.

“Well,” I said, “in a month my daughter will be marrying her girlfriend in Montreal and we’re all looking very much forward to the wedding.”

It was as though I had shaken salt onto a leech. She pruned right up. Then she shook her head, looked miasmal and muttered, “I don’t know. That just isn’t natural.  Marriage is between a man and a woman. . . .”

I looked at her and thought, oh, what the Hell. When am I ever going to see this sad sack again? “No,” I said firmly. “You’re wrong.  If you’d like me to educate you on the subject, I’ll be glad to. If you’d rather languish in antediluvian ignorance, I need this conversation to end.”

I had her at “antediluvian ignorance.” Well, I almost always do. She retreated into an uncomfortable silence and I did the same, but in my head I was having a field day: “It’s not like heterosexuality has done you any favors! “ “How dandy was it for you being married to a man?” and,  “With your track record I hardly think anybody’s going to be crowning you Mother of the Year any time soon!”

I didn’t say anything though. She was hard enough done by. And I’m nice. On the outside.

One thought on “Nice on the outside”