O, Say! Can You See Canada?

To celebrate their fiftieth wedding anniversary, my parents, my husband and I and my brother Peter, traveled to London, U.K. for a couple of weeks of sightseeing and theater. We stayed at a rented flat in Kensington so that we could save money eating in … which is how we came to be standing in the checkout line at the local grocery store when my mother enthusiastically informed the cashier, “We’re American and Canadian! Guess who’s American and who’s Canadian!” The girl peered at my husband and me; we were cringing with embarrassment. “They’re Canadian,” the cashier said flatly. “And you . . . you’re definitely American!”

I’m not sure exactly when I began to morph into a Canadian – not that the transformation is in any way complete. I still retain rock solid faith in my own moral rectitude — a quintessentially American trait –and when 911 happened, I plastered American flags on anything that didn’t move and burst into noisy tears whenever the word, “Firefighter” was uttered.

I came to Canada forty years ago as a graduate student at the University of Toronto’s Center for Medieval Studies. Like most Americans, my understanding of the great hulking land mass to the north of the 49th parallel was derived largely from Dudley Do Right cartoons. Indeed, my ignorance so appalled a Canadian friend of mine that he presented me with a reading list: Canadian Culture 101.  Several tortured novels and a passing acquaintance with the Group of Seven later, I remained unprepared for the through-the-looking-glass experience that Canada proved to be – things appeared to be more or less the same as in the States; they were, in fact, very different. Canada was far safer; people were more civil, if less exuberant; but, most of all, there was just a whole lot less drama.

Most of my fellow graduate students at the Center for Medieval Studies were American. They got together on Sunday mornings to mainline coffee, read the New York Times and complain about how boring Canada was. Not me. I hung out in my basement room in the Annex with a blue parakeet named after the Roman Emperor Julian the Apostate and listened to bleak radio dramas on the CBC about life on the Prairies. I married a Canadian. Then another one. I didn’t leave.  I became a Canadian citizen and, as time wore on, I grew less and less enamored of my native land and more at home in my adopted one. 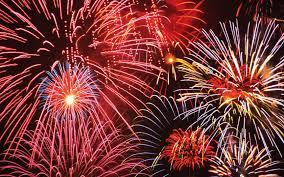 Who needs fireworks? Just threaten to take away Americans’ guns and watch their heads explode.

The United States has been a force for some good in the world, but recently it has come down with a real bad case of stupid.  A couple of years ago, I was walking my dog at dawn on a North Carolina beach when I met a local man doing likewise. Twenty children had just been gunned down by a madman in in Newtown, a town I had once visited and found charming, and  the U.S.’s credit rating had just been degraded because of Republican shenanigans. We lamented these debacles and then he asked,“What do Canadians think of Americans?”

“We think you’re crazy,” I replied.

So, to both my countries on your Special Day, have a good one! I pray to the Universe that not too many drunk or stoned Canadians celebrate Canada Day by falling off the dock and drowning. I also pray that not too many of my fellow Americans decide to mark the joyous occasion of the Fourth of July by mowing down more of their compatriots  in yet another senseless mass shooting.

Because minimizing the slaughter would be awfully nice and what is more Canadian than nice?