Requiem for a wolf

The other day I was picking up dog food at the vet’s when a character straight out of Duck Dynasty slouched through the door.  He was tall and rangy, stooped, wearing an oil-stained Nascar jacket and a broken down baseball cap and sporting one of those Old Testament Beards that look like a bird’s nest gone rogue. “I’ve come about my wolf,” he announced.

The receptionist was startled.  “Your wolf?”

The receptionist looked wary. “Where is Tasha?”

“I want to have her cremated,” said Duck Dynasty Guy.  “I want … you know … her cremains. She’s been with me these last fourteen years. I want her to always be with me.”

“Of course,” said the receptionist with an unctuosity that made me realize Funeral Director was part of her job description. “Do you want to look at urns?”

I hefted the bag of dog food. “I’m just going to put this in the car.”

I lugged the 15 kilo bag out to my car.  Parked next to it was a battered pick up truck.  Two sad sacks slumped disconsolately beside it, smoking. They looked like extras from the set of Deliverance.  From this I deduced that they were associates of Duck Dynasty Guy and named them in my head Cliven and Bundy.  “So sorry for your loss,” I said.

Bundy, crestfallen, said, “Just yesterday she was playing ball with the puppy.”

To which Cliven added, “You can’t help lovin’ em.  You just can’t. You ain’t got no choice.” Whereupon he shook his head dolefully and spat. 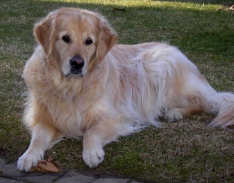 I returned to the counter and paid for the dog food. Duck Dynasty Guy was perusing a catalog of urns and making choking sounds. He smelled of rye.  I gave him a pass; when our beloved  Buddy died five years ago  my husband and I holed up in the house for three days, sobbing and drinking whiskey. It happens.

When I went back outside, Cliven and Bundy were occupied with hauling from the flat bed of the truck the body of a creature that was probably a dog, but really did look like a white wolf.   Cliven took the front feet and Bundy the back.  Her head hung limply back. She looked empty, like all the light had gone out of her, which, of course, it had.

The rest of the day felt like a Black Dog Day to me. Reminded that the light would one day go out of my beautiful Nellie and I would once again slide feet first into that particular slough of despond, I could not help but be steeped in melancholy. The creature in question might be only a dog . . . or possibly a wolf,  but Cliven was right: you really have no choice.  You can’t help loving them.  You just can’t.