Leave a comment
By melissahardytrevenna Sabra the Astonishing, uncategorized 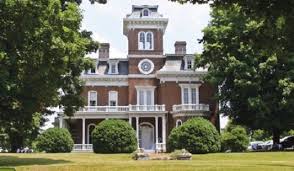 A house resembling Ararat, the mansion in my novel, Sabra the Astonishing

As I draw near the end of this revision of Sabra the Astonishing, Lorenzo Da Silvio makes a last appearance.  (I’m almost finished!)

Da Silvio drew one of the cane-bottomed rockers conversing in small groups about the veranda away from its creaking fellows and placed it before the veranda railing. Laying The Lives of the Saints on the floor beside it he sat, drink in hand, surveying the manicured lawn as if he sat in a box at the theater before an empty stage.

The moon pulsed over that fringe of tall, shaped trees which rose above the lawn and on the distant horizon the lights of Raleigh glittered like a beached constellation washed up on an inhospitable shore. Behind him the restless house stirred and shifted its burden of kudzu ivy almost angrily then settled, then woke with a start. The floorboards all around him creaked. His rocker squeaked. The other rockers squeaked. A loose shutter somewhere on the second floor of the southern facade tapped against the brick wall as if to drive home a point, and around the yellow glove of the veranda light a ghost moth swung and swung, brushing the thick opaque glass with her white fine wing. It began to singe it. He could smell it.

Da Silvio dug into his jacket pocket and after a moment extracted from the debris at its bottom a battered cigarette. He lit it and, holding it before him, examined the bright ember.

Then he heard a sound very like a human groan. The house? he wondered, glancing sharply up at the veranda ceiling.

He heard the sound a second time — louder this time.

He rose to his feet, placing his drink on the cover of the book beside his chair. He dropped the cigarette to the floor and stepped on it.

The stable door creaked open and after a minute a figure, tall and stooped, staggered through the door, holding his head in his hands. The stained white satin jockey’s pants gleamed like a fish’s body in the moonlight. It was Dick, the groom. He raised his face to Da Silvio, whose figure he could discern by the veranda light and removed from his battered head hands sticky with dark blood.

“Dick!” Da Silvio exclaimed. “What’s happened?” He started down the steps towards him. Then he heard the sound of a car grinding up the hill. Both he and Dick turned to look down the driveway in the direction of the sound. In a moment they saw a car’s lights blink on and off like the staccato message of a signal light as it moved towards them down the long avenue lined with tall tapered cedar trees, before the car rounded the final curve of the driveway and bore down on them, its headlamps two smoking corridors of white light. The car stopped just short of the pink granite sundial. The headlights sunk to low beam, then snapped off. A door opened, and Sheriff Dale rolled out of the car, at the same time as he rolled his flat-brimmed sheriff’s hat off of his head and into his plump, grimy hands. Da Silvio had seen him once or twice before. Recently he had come to ask Ananais to put a lock on the gate which led from St. Mary’s cemetery to the woods of Ararat so that snake-hunting on the hill might be inhibited. Da Silvio had always thought that Dale fitted his skin and clothing in the same way sausage meat fills its casing, without a rumple, to the point of bursting. Although the night was growing chillier, the sheriff’s red face exuded drops of sweat as large as tears. His brown eyes, small and wise as a pig’s, fell upon Dick. He wrinkled up his nose and dragged a meaty hand over his moist, sticky forehead.

“Good God, boy,” he exclaimed. “What happened to you?”

But Dick knew well the hand that fed him. He was solicitous of it, and when he did bite it, he took care to do it in private, when he might reap some material advantage from it. As he fully intended to do on this occasion.

“Fell down,” he said gruffly, turning away from Dale .