My Fifteen Minutes of Fame 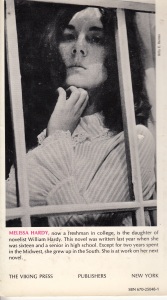 The back cover of A Cry of Bees

When I was sixteen, I wrote a novel entitled A Cry of Bees, which was published, a year later, by no less a house than Viking Press.  I didn’t seek publication nor did I even consider it within the realm of possibility; my sole idea starting out had been to see how long a story I could manage to eke out. It was my father who, unbeknownst to me, sent the manuscript to his literary agent and Malcolm, in turn, who shopped it to Viking.

I’ve often wondered why Viking bit.  It was a good enough little bildungsroman, quirky and dark and possessed of a certain gawkish charm, but it broke no new ground and the talent it hinted at was, at best, nascent.   Perhaps they believed that the novelty of my youth would suffice to send it flying off the bookshelves; perhaps they thought that they were making an investment, as publishing houses did in those days, in a writer with a promising future. In both respects, it seems, they were mistaken.

When the novel came out, I was dispatched all over the Southeast to do readings and book signings — a heady experience for a seventeen year old. I remember landing in the Atlanta airport. At the time, it consisted of one large room decorated with illustrations from Uncle Remus’s Brer Rabbit Stories — not the Walt Disney ones, the original ones. It was 1970, after all, and Georgia.

All of the media regarding me . . . and there was a scrapbook full . . . focused on my youth and my looks. “She writes books and she’s pretty!” exclaimed one rapt journalist. Another remarked, “She has talent and a tiny waist.”   I can’t help but cringe when I re-read those articles – so unabashedly sexist – but I can’t pretend that I don’t feel the teensiest frisson of gratification as well. Forty six years have passed since then and much has changed. Today the Atlanta International Airport is the size of a small city. As for my waist, it disappeared from view several years ago, never, I fear, to be seen again.

The trouble with publishing a novel that young was that it set the bar very high – too high, as it turned out, for little me. It would be twenty one years until my next publication – a short story entitled Magical Thinking that appeared in the New Quarterly in 1991. And not for lack of trying. Oh, I wrote. And I wrote. I just could never attain what had once been given to me on a silver platter, what had seemed, at the time, so easy – publication.   I spent twenty plus years all washed up, a has-been, someone who had not lived up to her potential, a disappointment.

Thankfully, after a two decade long hiatus, I have been met, not with the overwhelming success I anticipated would be mine, but with a more modest success.   I’ve published three additional novels and two collections of short stories. My work has appeared in noted journals and magazines, it’s been anthologized, and, along the way, I have won a couple of significant awards.  Not bad.  Also far from stellar. There’s a reason I retain my day job.

The rabbit in the foreground had astraphobia.

The year A Cry of Bees was published, my father’s university department threw a little party for me and presented me with a sterling silver cup on which was engraved: Melissa Hardy. Congratulations on A Cry of Bees, 1970. I have it still, though the silver has become so tarnished  it’s hard to make out the words.  During the party, the Department Head, a sweet man named Wesley Wallace, seized my hand in both of his, squeezed it, and promised me, “The world is your oyster!”

He didn’t tell me that it would be my oyster for … oh, about fifteen minutes.  And that, after that, it would be somebody else’s.

2 thoughts on “My Fifteen Minutes of Fame”