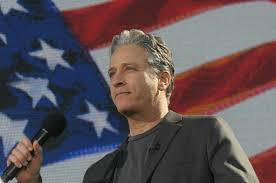 Jon Stewart. My idea of a true American.

When I told my husband Ken that I was going to devote this week’s blog post to Jon Stewart, he warned me that any remarks I might make at this juncture would be but as mere drops in the great Pool of Tears shed by fellow-feeling Liberals in the months leading up to that host’s departure from The Daily Show; they would, on that account, go unheeded. This does not deter me. I have long been resigned to being a non-entity and, besides, how could I let Jon go gently into this good night without at least a little raging against the dying of the light? He has been too important a force in my life for that. 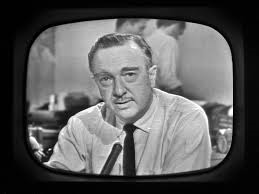 When I was a child, my parents’ favorite anchorman was Walter Cronkite. He had integrity. He had gravitas. He was humane. When Walter Cronkite advised his viewers that what he was about to show them was disturbing and that they might want to send children from the room, my parents showed us the door.   They trusted Walter Cronkite implicitly.

Jon Stewart was my Walter Cronkite.

I started watching The Daily Show in 2001, shortly after 9/11, and have been a devoted viewer ever since, TVOing the late night show so that I could watch it the following day.  I never missed a show. For the past fourteen years, his take on situations has informed my take; his outrage has given expression to my outrage; his relentless and spot-on deconstruction of the right wing media has shown light into all the dark, yucky corners of that Evil Empire and sent the cockroaches scuttling. Jon may have hosted a fake news program, but he told it like it was. Yes, he had writers and a great team backing him up, but The Daily Show was, in the final analysis, Jon Stewart. Never again will I take curious comfort at his bad imitation of George Bush laughing (“Heh, heh, heh!”) or delight to his rendering of Lindsay Graham as Blanche Dubois or for all those times he absolutely, positively just nailed it. To quote Hamlet, we shall not look upon his like again. 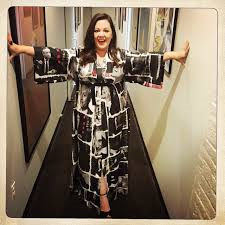 Where can I get Melissa McCarthy’s Jon Stewart dress? I think I need one.

So, good night, sweet Jon Stewart. May flights of angels sing thee to thy rest. I, for one (and we are legion) will miss you more than you can possibly know.

I need a moment of Zen.