Me Not Talk Pretty One Day 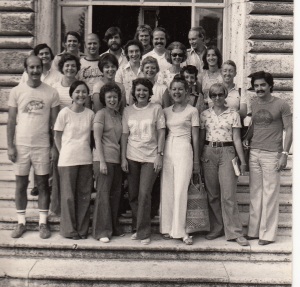 My class at the American Academy of Rome. Third from right in the white pants.

I have always believed that, to be truly sophisticated, one must be able to speak a foreign language well.

To be sure, I have always been good at languages. In my heyday (i.e., not now), I dreamt in ancient Greek, could provide an almost simultaneous translation of any Latin text, read French and Italian with relative ease and extract gobbets of meaning from German. The only language I could remotely be described as speaking, however, was Italian and by ‘speaking’ I mean, locate the toilet (“Dov’e il gabinetto?”) and order off a menu (“Un’ cappuccino, per favore.”)

Once I found myself trapped in a stall of a woman’s bathroom at a train station somewhere in rural Tuscany en route to Florence. “Aiuta!” I cried. “Aiuta!” Meaning, “It helps! It helps!” It took a long time for the male attendant, armed with this disturbing information, to work up the nerve to enter the bathroom and release me from the stall.

Another time I noticed water coming from under a door on the upper floor of a hotel in Calabria. “La terra e coperta con aqua!” I informed the desk clerk: “The earth is covered with water!” Again, it took him a while to work out that I was not just learning that 71% of the Earth’s surface was covered with water, but that someone had left a faucet running in one of the upstairs rooms. 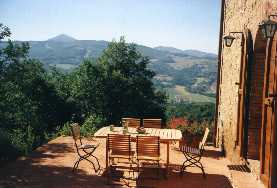 The patio of the Umbrian farmhouse we stayed in — Il Palombaro

My brother Peter experienced a severe toothache when my family was vacationing in a farmhouse in Umbria. We contacted the English agent who had rented us the farmhouse and asked if she knew of a dentist he could visit. She said, “Well, I think here’s a dentist in Montone. I don’t know his address, but I believe his name is Dr. Zucchini. Maybe if you went to Montone and asked people on the street, they might be able to point you to him.” Finding daunting the prospect of driving to Montone and wandering the streets, asking passersby, “Dov’e Dottore Zucchini?”, we ultimately did locate a dentist in nearby Umbertide. I accompanied my brother in the role of translator. We had a little trouble locating the office until  a woman exiting a door, pressing a large bunched up towel to her mouth and moaning, confirmed that this was the right spot. In the end, between my Italian and the equally scant English of one of the dental hygienists, we managed to affect a successful root canal, although I created considerable confusion by insisting that Peter’s offending tooth was “morte” (dead), while the dentist staunchly maintained that it was “morbido” (soft).

My French teacher in high school was Miss Rainy. Miss Rainy had been the French teacher at Chapel Hill High School for upwards of forty years and had the most appalling accent: “La plume de ma tante,” in Miss Rainy’s mouth, came out sounding like, “La plooma duh mah taunt.” Miss Rainy lived with her mother all her life and never traveled to France. That was her tragedy: she taught bratty high school kids French her whole life, yet never visited Paris. My tragedy (and I acknowledge that it is a “first-world” tragedy and of little import in the Great Scheme of Things) is that I will never experience the joy of speaking another language well. That must be unspeakably wonderful, like singing in harmony, which I also can’t do.

Or, as Miss Rainy would have said, “Putt ettra.”

One thought on “Me Not Talk Pretty One Day”