In honour of American Thanksgiving and because I’ve been away at a conference all week, I’m republishing last year’s blog on the subject of this troublesome holiday, about which I feel . . . well . . . meh.

I’ve never been keen on American Thanksgiving. In the first place, it’s way too close to Christmas. The memory of my grossly distended belly and the self-loathing that invariably attends that phenomenon have scarcely begun to fade before there it is again: The Holiday Meal, in the case of my family, the exact same meal we ate a month earlier, including the dressing which we always had to call rice because my brother Peter refused, for some reason, to eat anything called dressing.

Then there’s the 2 p.m. timing of the meal. It’s Thanksgiving dinner, for God’s sake, not Thanksgiving lunch!   If Thanksgiving dinner happened at a decent hour – any time after 6 p.m., for example – the torment of having to remain awake while cruelly stuffed might be mitigated by an early bedtime. But, no. This insistence on an “early dinner” blows a black hole in the middle of your day — everything is sucked into it; nothing can escape its relentless gravitational pull, and you are left to lie there, beached and disconsolate, a helpless, unwitting witness to the televised spectacle of giant men in tight pants sustaining the kind of traumatic brain injuries that lead to dementia, debilitating neurological diseases and suicide. By which I mean football. 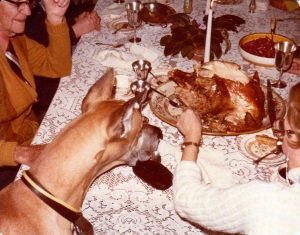 My family is surprisingly functional – which is not to say that we don’t have our fair share of little traumas, pretty much all of which can be characterized, as per my daughter Alice, as, “first world problems”. However, not even we were not immune to the kind of dysfunction that seems to go along with quivering tubes of cranberry sauce and pumpkin pie that looks like baby pooh. Case in point: one Thanksgiving when we were children, my mother, frustrated at my brother who was being all winge-y, shook him. Now my parents were not into corporeal punishment; Mom far preferred a good shaming larded with barely veiled threats that she was on the verge of disowning us, as conveyed by such statements as, “No child of mine would ever do (that thing you just did).” All this to say that Mom probably didn’t shake Peter very hard, but, on that one occasion, shake him she did, and, every year thereafter, Peter would kick off Thanksgiving dinner by dolefully recollecting, “And then there was that Thanksgiving Mom shook me. . . ,” sending the poor woman into fresh paroxysms of guilt.

Sometimes we had Thanksgiving Dinner at my paternal grandparents in Hillsborough, North Carolina. My Aunt Elaine and Uncle Clyde would come down from Winston-Salem and Aunt Elaine, who was something of a gourmet cook at a time when that was regarded with some suspicion in the South, would bring along a little something for the family to savor. One year she presented the assembled, bleary crew with tomato aspic, confounding us all. “What is this?” “Do you eat it?”   This reminds me of a conversation we had with my husband’s Auntie Gloria in which she described the eating habits of her daughter-in-law. “She eats strange things,” Gloria confided in us. “Like vegetables.”

Between her alcoholism and her morphine addiction, my grandmother had succeeded in pickling herself by the time my memories of her congealed into some kind of coherence. Noni contributed but one dish to the Thanksgiving feast – her signature dish, a sweet potato,marshmallow casserole awash in a sea of bourbon. At fifteen minute intervals throughout the dinner preparations, Noni would lurch to her feet, weave her way to the kitchen, baste the sweet potatoes, baste herself and return to the living room to stew in her own juice.

My father carves as my mother smiles for the camera

In the meanwhile my grandfather, by dint of steady  drinking, would wax from sentimental to downright maudlin before deciding to check on the mail.  I would accompany him to the mailbox at the end of the long driveway, both of us knowing full well that there was no mail on Thanksgiving but that we needed the air.

So, all in all, I’m thankful for Canadian Thanksgiving, which takes place in the second week of October.  Canadian Thanksgiving celebrates the harvest rather than that time before we exterminated them that Native Americans saved our bacon.  It doesn’t result in a four-day holiday and, therefore, a loyalty test wherein persons are forced to travel vast distances in inclement weather to prove that they love their families of origin. And finally, being on a Monday, Canadian Thanksgiving isn’t followed by Black Friday, about which don’t get me started.  And then there’s the fact that my ex chose Canadian Thanksgiving 1989 to come out of the closet — scarcely festive at the time, but, in the great scheme of things, something for which I am truly grateful.