I am a bear of very little brain.

I do not like brain games, perhaps because I’m a bear of very little brain and prefer to use the limited powers in my possession to find the necessities of life – by which, I mean food and yarn.   For that reason I was relieved to read in a recent issue of Time Magazine[1] that there’s no solid evidence that playing brain games improves your cognitive abilities. They might be fun — if you like that sort of thing — but, sad to say, your premium membership in Luminosity may not keep the wolves of Alzheimer’s at bay.

You have my sympathy.

Remember those math questions they used to give you in school: “If a train is going fifty miles an hour and the town is twenty miles away and Johnny started the card game with two dollars, but has been losing money at a rate of fifty cents every two minutes, how much money will Johnny have when he arrives in town?” Yeah, well, I hated those questions. When presented with one, my brain would derail one hypothetical clause in; they had me at “train.”  A similar thing happened in the course in Pre-Socratic philosophy I took whenever a version of the verb “to be” appeared more than five times in one sentence: on those occasions my brain actually exploded.

My grandfather, James H. Zant, of whom I am inordinately proud, was a renowned professor of mathematics; he authored many of the first New Math textbooks.   Clearly, all the math smarts set aside for his line were gobbled up by him, leaving me without the ability to do so much as calculate a percentage.  The only time I ever did my own taxes, I free-styled percentages (that’s the only way I can think to describe it), with the result that Revenue Canada, upon auditing me, discovered I had grossly overpaid and sent me a couple of really nice refunds to remedy the error.  Just think of all the times that didn’t happen.

I think that the appeal of brain games must be that they are time-passers. Indeed, the only time I don’t resent a brain game being thrust upon me is when I am recumbent in a dental chair getting my gums planed and there’s a jumble taped to the ceiling.  On all other occasions, I prefer to listen to audio books and podcasts while knitting scarves and hats for people experiencing homelessness, blankies for people experiencing babies and socks for me experiencing cold feet. I never give away my socks. I hoard them. A girl can never have too many.

It’s not that I’m immune from fearing an age-related decline in my cognitive abilities. At sixty two I have already begun to notice aphasia kicking in. Oh, the words do come . . . eventually . . . but, whereas my word retrieval used to be jack rabbit fast, it is now more like a floppy eared old wobbly bunny that hops here and there, wheezing while she struggles to remember what the Hell she’s looking for.

Ursula Staudinger, director of the Butler Columbia Aging Center at Columbia University (where, incidentally, my math genius of a grandfather did his PhD) says, “It’s like, you walk through fresh snow, you leave a trace. If you walk the same route again, the trace gets deeper and deeper . . . The fact that structural changes occur [in the brain] does not imply that in general this brain has become more capable.”  So what you are doing when you play brain games is, in essence, something akin to running around and around in circles. My Ur dog Ughy did that around our childhood swing set, wearing a deep groove in the lawn — a doggie crop circle, if you will. He did live to the grand old age of 17 — not bad for a pooch– but I’m not sure that he was any the smarter for his efforts. 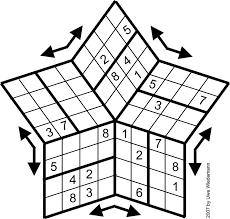 I have no idea what to do with this . . . and absolutely no interest.

So, by all means, enjoy your teasers and your riddles and your puzzles and your jumbles and your sudokus, but don’t expect me to join in. I’m too busy knitting and trying to remember the name of that thing . . . you know. That thing!

(And BTW, having to continuously canvas the room for the answer to the hint in your crossword puzzle . . . I’m pretty sure that’s cheating.)