My parents: Captain Star and Vampirina 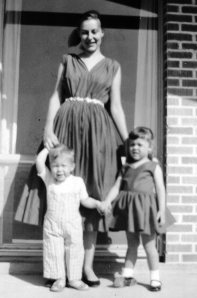 Mom and Peter and me. Our matching dresses are red.

I am the child of celebrities. Going back to the fifties, when my father played Captain Star on a local children’s television show and my mother, a.k.a., Vampirina, rose out of a coffin to host late night horror movies.  To get to the gig, off she would scuttle off in the dead of night just as Dad was coming home from rehearsals; they would pass like ships in the night. He was teaching Drama at Texas Western at the time and she was gnawing on her knuckles as a largely stay-at-home Mom in a new subdivision of tract housing separated on one side from El Paso by ten miles of cactus strewn, rattlesnake riddled dessert and, on the other, from Mexico by the same.

One day she heard  breaking news from the local radio station that a mysterious space ship had landed on the highway separating El Paso from our subdivision and that the army had been sent out to investigate.  Mother, being Mother, kicked into survival mode. She filled a thermos with water, stuffed a bag with sandwiches and  tied Peter, me and Ughy to her waist with ropes; she was ready to set out across the dessert towards Mexico with two toddlers and a cocker spaniel in tow.   Then she tuned back in to get an update and found . . . nada.  Back to regular programming.  Never a mention.  Never an explanation.   A complete news blackout.   Fort Bliss, a major Cold War military center, was close by; possibly the alleged “space ship” had been a top secret test gone awry.  The weird thing was . . . Mom was apparently the only person who ever heard this story.  No one else has ever corroborated it. Yet she swore all her life that it was true and I believe her.  Mom didn’t lie; she did, however, exaggerate for effect.

Demographics ensured that my brother Peter and I, being somewhere between two and five years old at the time, were far more impressed by Dad as Spaceman, than by Mom as Living Dead.  Captain Star was typical of the kind of locally produced kids’ programming of the time –  hosted by a colorful host with an exotic persona such as cowboy, jungle explorer or, in Dad’s case, spaceman, whose job it was to DJ cartoons and, in the breaks, engage with a live studio audience of adorable kids, who, as Art Linkletter was fond of pointing, “say the darnedest things!” Case in point, my brother, who, when allowed to participate in the studio audience, blew Dad’s cover by replying to the question, “And who are you, Little Boy?” with, “You know who I am!  You’re my Daddy!”  Apparently, Spacemen, like monks, were not supposed to have children.  Peter was banned from the set.

I, being older, and a far more accomplished liar, adroitly handled the subterfuge, as a result of which I was allowed to come on the show a number of times.  Honesty might well have been the best policy, but the stakes were high. The show was sponsored by a local bakery.  There was cake and I was willing to do anything to get some. In later years, my family would continue to be impressed by the sheer brio with which I could and frequently did prevaricate.  “Lightning is going to strike you dead!” my mother would cry reproachfully, but it was reproach tinged with admiration.  I would like to point out here that I only lie to weasel out of things I don’t want to do — white lies, intended to avoid hurt feelings. “Now you’re going to have to figure out some other excuse for why you have to leave early,” my friend Linda Nicholas told me when my dog Buddy died.  Dammit, I realized.  She’s onto me.

Another thing Captain Star did was to call apparently random  numbers and ask whoever picked up the phone a question like, “Who discovered America?”  Then, if that person couldn’t answer, he’d ask the studio audience the same question.  What he actually did was call his hung-over friends, who, it being nine o’clock on a Saturday morning, would roundly curse him.  At which he would smile and nod and  say, “I’m  sorry, Bobby, but ‘oak’ is not the right answer.  I guess I’ll just have to ask the Boys and Girls what kind of tree George Washington chopped down.”

We don’t actually have a photo of Captain Star.  I can’t think why not.  I can tell you, however, that he wore black tights, a black turtleneck, a Papier Mâché space helmet and a cape.  The cape, which Mom had fashioned, was black and featured appliqued sequins and stars of silver lamé.   It hung in our hall closet when not in use, next to the raincoats and the windbreakers.   Captain Star was a tad portly.  Dad had been skinny all his life, but living in close proximity to cheap Mexican rum for an extended period had resulted in him acquiring a notable pot belly. His fans didn’t seem to mind.  A four year old boy once appeared on our doorstep with a toy car to bestow upon his hero and Dad was regularly mobbed at the local swimming pool with cries of, “It’s him!  Captain Star!” while he sat, slouched and distended,  nursing a hangover in the shallow end, a cigarette hanging out of his mouth. 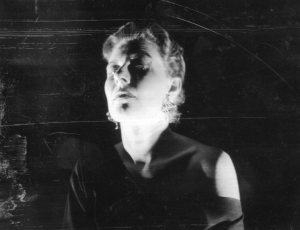 Vampirina had her fans too, although not among the toddler set.  The apogee of her fame came when she was featured on the cover of the local TV Guide, together with a story about this nice, pretty Mom who, amusingly enough,  moonlighted as a horror show host.  What they didn’t write about . . . what they couldn’t have known was the woman who was ready to strike out across the desert to avoid alien abduction.  That woman’s day was to come.