All Aboard the Ice Floe! 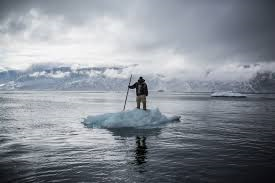 I am steeped in melancholy; this will not be a long post. It has been a week of tepid angst, beginning with a visit to my 93 year old father in Chapel Hill, who, though cogent, content and reasonably comfortable, seems more sadly diminished every time we visit and so deaf that his end of any conversation consists of, “What?” accompanied by a pained look as he struggles to comprehend.

He has a single room in the dementia ward of his nursing home,  which doesn’t bother him since he can neither hear nor see anything and has no plans or, indeed, the means to flee what is, in fact, a locked facility. It is a sad place: the dinners taken in the little dining room with West Indian geriatric aides spooning pureed food into the mouths of ancient, birdlike women with empty eyes, an improbably nicely turned out woman named Martha – my mother’s name — who keeps barging into his room with parcels she has made off with or boxes of surgical gloves or cleaning supplies, and who must be led, babbling gentle as a brook, back to the common room to join the ten or so other slack-jawed residents dangling at odd angles around the television set, looking like things hung out to dry. Perhaps she was a post mistress in her previous life. Or a drug mule.

My maternal grandmother’s  mantra was, “If I get like that, you’ve got to promise you’ll shoot me.” She was from Texas, where guns are considered the solution to all manner of problems , including, it would seem, one’s dotty old granny.  As matters fell out, Grandmother blew up all on her own in an event somewhat akin to spontaneous combustion and none of us ended up having to go to the pokey for her senicide,  for which we were all peculiarly grateful. 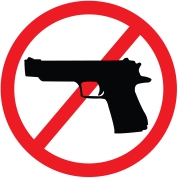 I am not happy that my mother died when she did at the age of only 79 and with her full faculties. Surely she had a few more good years in her. However, post a visit to Dad’s nursing home, I find myself relieved that she didn’t linger longer than she herself would have liked. “Shoot me,” she would have said. “Just shoot me,” but the sign right on the nursing home door states that guns are prohibited inside. Prohibited? In the one place in the United States of America where they might actually do some good?

Now before you get your knickers in a twist, I’m not saying that old people should be rounded up and shot; after all, I’m perilously close to being “that old” myself. But the idea of a nice doctor-assisted suicide for those who want to shuffle off this mortal coil with a shred of dignity is something that resonates with me.

Event planners, take note. If gay weddings and  gender-reveal parties have proved to be great little money makers for you, just think what a market there would be for All Aboard the Ice Floe parties — friends and families gathered around, a chance to say goodbye,  good food and drink, music. Then. . . .

The key. as with so many things, is great drugs.