Nearly thirty years ago I found myself in Newtown, Connecticut, celebrating the Fourth of July with some second cousins of my first husband whom his mother had browbeaten us into contacting when we moved to Cambridge, MA. Steve was a cop and Lynette was a secretary. They lived in a neat little Cape Cod on a well-manicured street and had two spindly little kids, made all the more spindly by the fact that each of their parents weighed in at well over three hundred pounds. They were also really nice folks, Steve and Lynette, salt of the earth. Steve confided to my ex that the few extra pounds had proven an asset in his line of work, since it increased the intimidation factor. “The bad guys,” he said, indicating his formidable paunch. “They don’t want to mess with this.” Pre-Adam Lanza, Newtown was a sleepy little burg, clearly untroubled by serious malfeasance if would-be preps could be deterred from crime simply by the prospect – as alarming as that prospect was — of being sat on by one of Newtown’s Finest.

Lynette wore her arm – which, both in size and appearance, resembled a large ham — in a sling. She had broken it rolling down the stairs the previous week. “She got wedged at an angle between the wall and the bannister,” Steve explained. “Like really stuck. We had to call in the paramedics to dislodge her.” Lynette laughed and shrugged. “I get stuck a lot.” I brought a pecan pie for dessert. It had raisins in it. Lynette was surprised. “Raisins in a pecan pie,” she said. “Well . . . that’s different!” She did not appear to hold out much hope for a pie that contained both nuts and dried fruit.

After dinner we retired to a park to watch tiny boys play softball. We sat on lawn chairs arranged alongside a baseball diamond — all the parents did and every single one of these parents, without exception, was spherical. This would not perhaps have been so striking had not each and every one of the tiny boys, without exception, looked like escapees from a North Korean orphanage. The juxtaposition of the leviathan adults sprawled like beached whales atop groaning lawn chairs, lustily bawling at their spindly offspring to, “Run!” “Stop him!” and, “Slide! Slide!” all the time mowing down jumbo-sized bags of potato chips and vats of sugary drink, struck me at the time as . . . as what? The word that came to mind at the time was, “grotesque.” 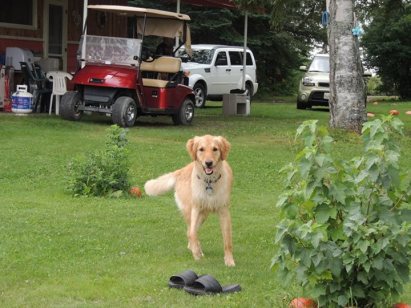 Nellie having a blast at Lake Nellie

Later this month we will travel north to Timmins, Ontario to visit my in laws. If the weather cooperates, we will spend a day at my brother-in-law’s cottage on the aptly named Nellie Lake.

This is what will happen at Nellie Lake.

Everyone will park his or her ass on a lawn chair, down one alcoholic beverage after another and watch Nellievision. Nellievision is what happens when a half a dozen adults and a few bored recent escapees from adolescence blearily eyeball Nellie, our four year old golden retriever, as she proceeds to have the absolute time of her life treeing squirrels, frantically digging in the mud in the hopes of finding toads to lick or varmints to inhale and swimming out to fetch sticks thrown far out into the Lake. “Chase those geese, Nellie!” everyone will cry. “Don’t let them poop on our beach!” And obligingly off Nellie will swim, in dogged pursuit of the offending geese.

And the sight of all of us drunkenly urging the dog on to new feats of athleticism somehow puts me in mind of that long ago Independence Day in Newtown. Only the word that comes to my mind this time is, “Fun.” It seems that, with the passage of time, I have become less judgy. Also less possessed of a waist. And, yes, I believe I will have another and, Nellie, clean up that goose poop for us, won’t you? Because, God knows: you’ve eaten worse.  Yes, you have.