Me when I first began work on Sabra the Astonishing.

Well, I’ve finally finished Sabra the Astonishing, thirty seven years after I first put pen to legal pad in the carrels of the austere library of the Dumbarton Oaks Institute for Byzantine Studies, where I was, as it turns out, masquerading as a serious scholar. I was supposed to be writing my dissertation on the life of Athanasius, the fourth-century bishop of Alexandria. Put off by the need to stick to known facts, however, increasingly obsessed with Marian visions, in particular,  the case of Bernadette Soubirous, and, not to put too fine a point on it,  unraveling, I began instead to write a novel, which I described decades later in an application to the Ontario Arts Council thusly:

“Sabra the Astonishing is the story of a teenage girl who sees an apparition which she takes to be the Virgin Mary . . . which it most definitely is not. Indeed, it is something far more sinister. Set in the sixties in the tobacco country of North Carolina, the novel explores the phenomenon of Marian visions and the steamier underside of Catholic excess.”

The novel went through a number of iterations, the most recent of which was completed twenty five years ago. My agent circulated it; no takers. My ex once described it less than kindly as, “bloated,” and, in retrospect, he was right. Sabra the Astonishing  erred on the side of excess; rather like the obese fellow traveler who sits next to you in coach, it had a propensity to ooze.  Nevertheless, I’ve always felt that the manuscript contained some of my best writing and the fact that it has languished in the bottom drawer of my file cabinet for so many years has been a source of  melancholy for me. Unpublished novels render one wistful. They are like dead babies; you can’t help but mourn them, to wonder what might have been had they been allowed to live.

This past year, I decided to have one more go at it, so I pulled out the manuscript and had a critical read.  This is what looking at a novel written by a young woman through an old woman’s eyes revealed:

Me when I finished The Virgin of Ararat.

The young woman was caught up in the story, in  action; the old woman, in context.

All these oversights have now been rectified and I will be sending the novel out again, but under a new title this time – The Virgin of Ararat. I’m doing this in the hopes that any editors who might have rejected it a quarter of a century ago will think it’s a different book altogether. Shhh! Let’s let that be our little secret.

In a post published on August 8, 2014,  entitled Pange Lingua Gloriosi, I wrote about one of my favorite characters: “Lorenzo Da Silvio, an aging, dissolute Italian portrait painter who’s been hanging around my novel, Sabra the Astonishing, for well over thirty years and is now being consigned to outer darkness by a plot that appears to no longer need him.”  I am well into a rewrite of this novel and just came across a bit of Da Silvio’s back story that I am excising . . . but would like to share with you.

Da Silvio had been born and raised in Florence. His mother had been one of those scores of minor contessas gently reared on modest incomes, whose name and grandiose title greets one from the mailboxes of every shabby but respectable apartment house in Northern and Central Italy. His father had been a barrister,  so neatly turned out that he might have been produced on a lathe. Da Silvio’s home life had been quiet to the point of tedium. The family, which included, besides himself, two rather bloodless older sisters, moved as if on eggshells through a tangle of  antique furniture beneath fading frescoed ceilings and flickering nineteenth-century chandeliers — the small, dark apartment they occupied having once comprised the public rooms of a considerable nobleman’s townhouse —  for his father, who was neuralgic to a high degree, could bear nothing in the way of commotion.

Every once in a while the family passions, too long concentrated, would explode. Denied a request, one of his sisters would choke with rage and clutching her napkin, rise from the table only to faint dead away. His other sister would shriek. His father would cover his ears and call plaintively for spirits — not for the victim, but for himself. His mother would burst into tears and go scrounging around in the depths of a corset which doubled as a pharmacy, wrestling out a phial of ammonia, but not before the girl had revived and apologized and subsided into mute, muffled misery. Then, like a cloud that drifts overhead and then dissolves, the tension which had prompted the outburst, which was never not there, would seem to evaporate, and life would settle like silt to the bottom of a pond, and Da Silvio’s family, like elegant crayfish, would scuttle on.

Later, after both sisters had married and moved out, Da Silvio, seeking to effect his own escape, began to succumb to attacks of religious mania. He entered orders. He left orders. He left the church altogether, determined to lead God, in whom he believed but whose methods he called into  question, on a wild goose chase. He returned to his native Florence and became a painter. 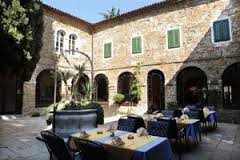 His first patron was the aged Contessa Piera Da Schio; she engaged the young artist to paint those ceilings in her Castello dei Pini on the Adriatic to which Tiepolo had not gotten round. He lived with her for nearly five years before an aneurysm felled her.  This took place on an oil cloth directly below the scaffold on which Da Silvio lay supine, painting the ceiling of her dressing room. It began in her brain, gained strength as it shot down her arm; by the time it reached her fingertips, it was as thunder. She crumbled to the floor, knocking over the pail of burnt sienna.

Da Silvio, hearing the pail overturn, rolled his head to one side. All he could see was pair of Ferragamo pumps dating from the forties. He swore softly, fearfully, and called “Piera?” When there was no answer he inched to the edge of the scaffold and, rolling himself off it, dropped  to the floor. There she lay, crabbed and stiff and curled into a fetal position, like an aged monkey found dead on a jungle floor. He knelt beside her and attempted to turn her over.  As he did, her fingers clamped onto his wrist and he read in the stunned, still-living eyes  that she wanted company on the long journey. Then a second aneurysm  rattled through her like an express train through a station. Light drained from her eyes.  They went as dull as pewter.  Her fingers grow cold and calcified around his wrist. He could not loosen her grip.

Ferragamo pumps from the ’40s

“Gianni!”  he called out for her servant, but the old man had gone into town on an errand. Da Silvio sat for a moment, then glancing about, spotted a small hammer. Weeping — for he had loved this old woman like a grandmother —  he seized the hammer and pounded on the fingers until he had broken them all. He remembered how brittle they had been.  Like old ivory.

Clinging to the Wreckage

It’s been several years since I’ve updated this blog.  Now I am old and Clinging to the Wreckage seems a vastly more appropriate title for my increasingly doddery musings.   Alas the prospect of figuring out how to develop a new blog with a different name  — the plethora of themes and widgets, etc. — has so confounded me that, rather than retreat in complete disarray, I’m just going to just forge on.  The thing is:  I have a new novel to promote and, as my past several publications have driven home to me, the darn things don’t promote themselves.  O, for the halcyon days when publishers handled all the marketing and authors just had to show up and not be too drunk!  Those days, it would seem, are kaput. No basking in glory for me.  I must not only bake the bread and churn the butter, I must also sing for my supper.

Which is unfortunate because I am so bad at it.

I am not shy, but I have always been a bit awkward — an elbow of a person.  I am not good at schmoozing.  I can’t work a room.  I fail to network even when cornered.  I even managed to screwed up my LinkedIn account so badly that I can’t access it, forcing me to ignore myriad invitations, which, in turn, makes me look very unfriendly to all the nice people who, for some unknown reason, want to say they know me.  Or know of me.  Half the names I don’t recognize.  But don’t get me wrong.  I like people. I really do.  Just not too many and not all at once and not all the time.  And I’m nice, just in a reclusive sort of way.

And then there’s sixty one years of cultural conditioning to deal with: Don’t call attention to yourself!  Don’t put yourself forward! Don’t blow your own horn!

So, here it is. My new novel, Surface Rights, published by Dundurn Press, will be available just in time for Christmas 2013!  Why not buy one for yourself and that favorite aunt of yours and anyone else you can think of?

Middle-aged Verna Macoun Woodcock returns to the family cottage for the first time in thirty-eight years to scatter the ashes of her husband, father and twin sister.  At first she is alone except for her dad’s dog, the lake, bitter memories and a barely hidden drinking problem.  But soon Verna is forced to open up her tightly shut world to others: strong-willed handywoman Winonah, the neglected children of her sister, each lost and broken in their own way, even the ghost of Winonah’s dead brother Lionel, who can’t seem to make it to the Sky World.

Just as Verna is starting to accept this newfound family, she discovers a mysterious and menacing prospector who posts a notice on the cottage door, stating his intention to dig for ore.  As it turns out, the Macouns hold the surface rights for the land, but not the mineral rights.  For the first time in her life, Verna has something to fight for and family at stake.

And it’s funny!  Really!  And kind of heart-warming too.   Plus it has ghosts.  And monsters.  And mermen.  And it’s set in Northern Ontario.  What’s not to love?

Surface Rights and all the other writer-y things I’m doing, watch this space.