My mother. The conversation continues.

Five years ago today (October 14, 2009), I wrote the following post.  It’s as true today as it was then … perhaps even more so.  As my dear friend Catherine Leggett observed,  “Death doesn’t end a relationship. The conservation continues; it’s just that it’s a little one sided.”  Every day I look into the mirror and my mother looks back and there’s not a day that goes by that I am not in constant touch with the woman who was . . . is my touchstone.

Four years ago today my spectacular mother, Martha Nell Hardy, died. I was with her when she passed away, for which I am profoundly grateful. She was unconscious; she had been for several days. Perhaps she didn’t know I was there. I hope she did, but I can’t be sure.

Mom and the second dog my Dad gave her, Ughy

We are not a religious family and I have come full circle from ridiculous Roman Catholic convert steeped in studies of doctrinal development (my graduate school experience) to avowed and crusty pantheist, by which I mean that I revere creation, but do not put any credence whatsoever in the existence of some single entity that invented and now micromanages the universe according to some cosmic game plan. Sorry, guys, but no. So I don’t think she has gone to Heaven. I think she has gone to me. She probably has gone to other people as well, undoubtedly my brother Peter, but I can’t speak of their experience. I can only speak of mine.

In the years following her death, I have become more and more like her. I especially notice this with my children, with whom I increasingly interact in much the same way she did. And I am grateful for this, because I think I wasn’t a very good mother before, so maybe she’s helped me make up for some of the bad years.

Then there’s knitting. I’ve always knitted, but now I knit maniacally. And the way I’m going, I might even challenge her record for dying with the most yarn and, let me tell you, hers was an AWESOME record.

I’ve also taken the torch from her as regards politics. She read several papers daily, listened to liberal commentators on TV and ranted with a vehemence and clarity that I now see in myself. As readers will know from previous blogs, I listen to political podcasts all day long and am more than willing to speak my mind, loudly, and for a very long time, indeed, perhaps ad nauseum — you be the judge. Had she lived, I would have gotten her hooked on podcasts, which she would have enjoyed more than newspapers because she could knit and inform her opinions at the same time.

Some might say that it was inevitable that I become like my mother over time, not some voodoo mystery transformational experience wherein her spirit, upon leaving her body, flowed into mine. She was, after all, my mother and provided me with both nurture and nature. But no. I think her spirit, upon leaving her body, did flow into mine, for which I am very, very grateful. It means I don’t have to miss her so much, because, guess what? She’s right here. And because I loved her so much, it means I like me more.

Mom, I love you. Thank you for being my mother.

Mom in a production of Light up the Sky in the sixties.

There are many reasons I eschew balls. Balls are generally deployed in games; indeed, many games are named for balls and, if there’s one thing I don’t like, it’s games. I have found when it comes to games, there’s a high and, in my case, an unreasonable expectation that, when presented with a ball, I will do something with it – catch it, for example, or hit it with a cunningly shaped piece of wood. If I fail to do this thing with the ball, well, then everyone yells at me, letting me know in no uncertain terms that, once again, I have let down the team.   In high school I can remember standing way, way out in the outfield, staring blankly up into the blue sky while everyone yelled, “Catch the ball, Hardy! The ball!” “What ball?” I said, whereupon the ball hit me in the head.   When it comes to balls, that’s the story of my life.

I inherited the no ball gene from my mother. The only sports in which she was proficient were deck tennis and archery – quoits and arrows, not balls — and my brother Peter’s Little League career was cut mercifully short by his predilection, while at bat, to duck balls pitched at him. Which was a good thing. If there’s one thing that my mother and I hated worse than balls, it was watching other people play with them.

There was a period when my family attended U.N.C.’s home football games. Mom knit; Peter read a comic book; I came for the tailgate lunches. I once attended a U.N.C. basketball game, but only  because the family of a boy I had a crush on had season tickets near Dad’s.   The boy didn’t show and I never went again. Then there was my son’s stint on the basketball team – oh, those round robin tournaments that began at six on a Saturday morning in a drafty high school gym with, “Who Let the Dogs Out? Who? Who?” cranked up to ELEVEN. Who, indeed? And where are they, so we can kill them?

Many people in my life are just fine with balls. My father loves football and basketball and baseball. Son Will and Daughter Sabrina were talented basketball players and Daughter Shanah, a soccer star. My husband favors hockey and baseball, but springs into vibrant action at the prospect of tennis, golf, billiards or bocce. That’s all very well, but to all those well-meaning friends and relatives who exhort me to  “Play! You’ll see! It’s fun!”   I say this:  there was a reason I was chosen last for teams. 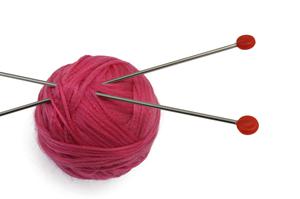 On second thought, there is one kind of ball I will do – a ball of yarn. Give me a couple of those and two needles and you can bet I’ll be having a great old time while the rest of you, like dogs, run around chasing things.