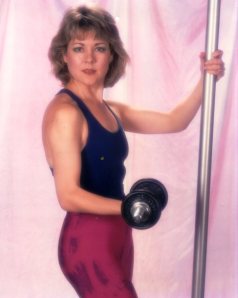 Me in the nineties. When it comes to exercise classes, I show up.

I am very territorial, which is to say: I like my spot. And when I say “like”, I mean really, really like, as in, should someone take my spot, I can pretty much count on being discombobulated and aggrieved for the remainder of the day.   This fixation on location, location, location manifests itself particularly in exercise classes, which is not insignificant since I have been going to exercise classes, either as an instructor or a participant, pretty much five days a week for forty years – upwards of 10,000 classes in total, which means 10,000 plus times I have been gripped with anxiety that some undeserving interloper might steal my spot, leaving me hanging.  (According to Malcolm Gladwell, doing anything over 10,000 times makes you proficient; I must deduce, therefore, that I am very good at attending exercise classes.)

I am not alone in liking my spot. Back in the eighties, I belonged to a high octane aerobics club run by Werner, a charismatic Olympic wrestler turned Richard Simmons, whose girlfriend, M.J., invariably laid claim to the studio’s most prime real estate – the spot directly in front of Werner.   All of us knew that this was M.J.’s special spot and, even as the class filled up and available space dwindled, none of us would have been so bold as to claim it for our own, for to do so would have been to risk M.J.’s considerable wrath.   Occasionally some neophyte would wander in and innocently take M.J.’s spot, only to be driven from it and banished to the obscurity of a back corner when M.J., with dudgeon, asserted her property rights. It was her way of staking claim to Werner, in essence peeing around him. I could relate. I had recently given birth to three children and, high impact aerobics being what it is, well. . . . Let’s just say ‘leakage’ and leave it at that.

Enter the nineties. The aerobics club closed. I joined a fitness club and promptly worked out a mutually beneficial arrangement with a guy named Neil – a strategic alliance. We would check in with one another before our Body Pump class and whoever was going to make it to the gym first would be charged with setting up both our benches, thus ensuring no foreign incursions into our territory. There was one would-be invader with whom we had regularly to contend – a blocky woman who resembled a steroidal Russian shot putter. Putinesque, she did not hesitate to encroach upon our spot should we be in the least tardy – this despite the fact that the ENTIRE CLASS understood PERFECTLY WELL that that was OUR SPOT. The tension mounted and the fray escalated to the point that I took to arriving at the gym a half an hour early so as to be there the instant the staff unlocked the studio door – the better to thwart her untoward and unconscionable advances. After I had moved on, I had occasion to speak to this woman, who was, of course, not Russian at all and perfectly pleasant.

A couple of years ago, seeking a more Zen-like equanimity — which, as the preceding paragraphs have surely indicated, was sorely needed — my husband and I joined a hot yoga studio. Now, five days a week, I arrive twenty minutes before the start of class, consumed with anxiety that I will not get my spot, which, of course, I always do because no one wants to go into the hot room twenty minutes before class even to reserve a spot – except, of course, me. There I lie in Corpse Pose, sweating buckets, exultant that I have, once again and against all odds, fended off all comers and secured my precious spot.

Where is my spot and why do I cling to it with such rabidity?

You’re about to find out.

My spot is in the first row, on the left hand side of the room right next to the wall. 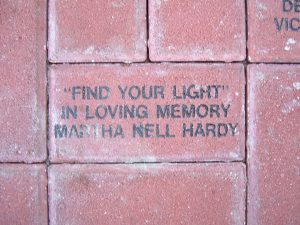 A brick in Mom’s name at the Miami Arts Centre

My mother, a charismatic actress, teacher and overall woman, used to say, “Find your light!” This could (and often was) taken to mean, “Find your light . . . and then shine!” She also meant it in the more prosaic sense of, “You’re blocked downstage left. For Pete’s sake, find your bloody light!”

I did not inherit what my parents used to call, “The Evil Gene,” which would have disposed me towards a life in the theater. I am nevertheless,Bill and Martha Nell’s daughter. My audience is the studio mirror and my fellow yogis, none of whom is actually looking at the sixty-two year old woman doing Toppling Tree over in the corner . . . and actually toppling; my light is my spot; and, come Hell, high water or Russian shot putters, I find it every time.